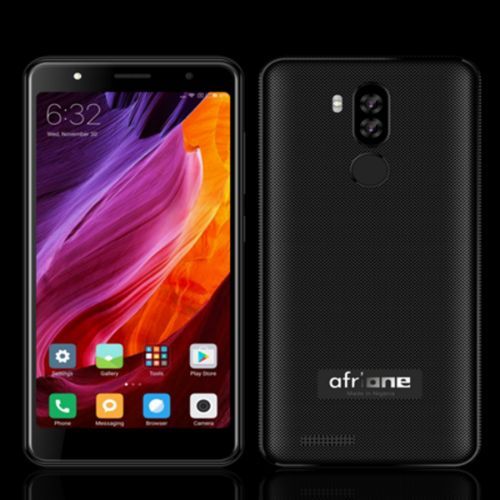 As you would expect from a smartphone at this price point, the Afrione Champion Pro features a basic design. It is easy to tell that the design of these smartphones, was one of the places the manufactures cut cost from, in order to fit this smartphone at this price point. There is no metal insight here, you have plastic chassis covering the motherboard inside. Taking a frontal view of the Afrione Champion Pro, you have large bezels. When compared with recent smartphones, the Afrione Champion pro looks a bit old. You have big bezels on top and below the display. In the top bezel, you find an earpiece, selfie flash, dual selfie camera, and proximity sensor.

On the rear, you have dual cameras, a camera flash, a fingerprint sensor, the Afrione logo, and a rear-mounted speaker. It features a headphone jack, a micro USB port, and an SD card port.

Forget the Pro moniker in its name, the Display on the Champion Pro display is no pro. It is a low-end display. The Phone features a 5 inch LCD display. This display is guarded by two large bezels as mentioned earlier. In this era were we have Quad HD displays, that are near bezeless, the display on the is Pro is low-end. Well having a very good display isnâ€™t the plan here. It is a basic budget device, having the kind of display is another price facilitator.

The Afrione Champion Pro features an Octa-core Mediatek MT6580 processor clocked at 1.3GHZ. Paired with this processor is 1GB of RAM, 16GB of internal storage with an option for Micro-SD expansion. The Afrione Champion Pro also features a 4500MAH battery. With these mediocre specs, you are not gonna experience lag doing basic tasks, like texting, browsing with not more than two tabs open and lots more. Heavy gaming, open many tabs and other tasking processes should be avoided. It runs its user interface on top of Android 8.0 Oreo.

Big spec figures do not facilitate good camera performance, but the numbers on the cameras on this smartphone is quite impressive. You have dual cameras on the rear as well as on the selfie spot. This means you should be able to take decent bokeh photos with shadow depth field. On the rear, the Afrione Champion Pro features a dual-camera system consisting of an 8MP primary camera and a 2MP depth camera. While for selfies you have a dual-camera setup featuring an 8MP primary camera and a 0.8MP secondary camera.